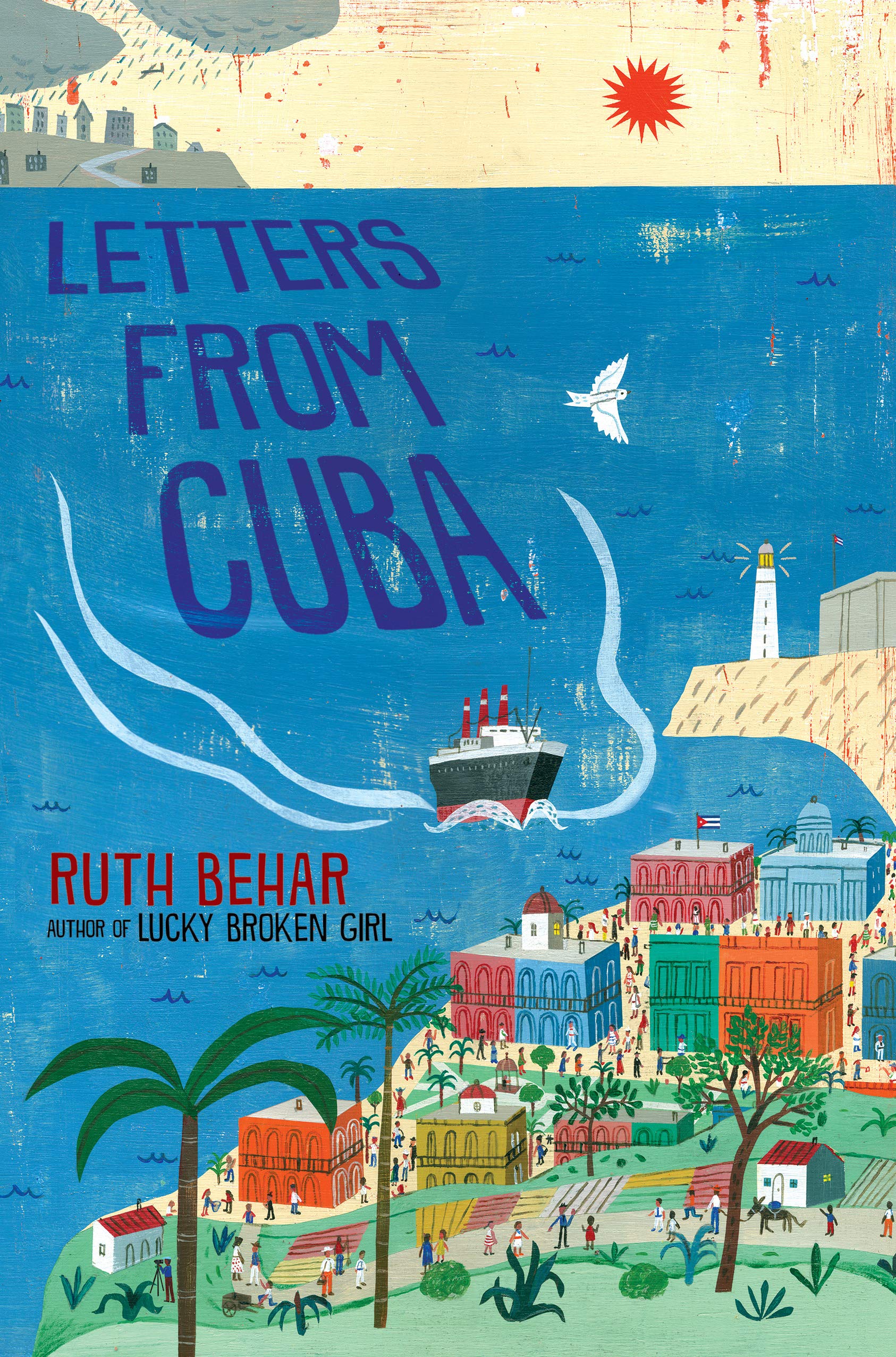 Pura Belpré Award Winner Ruth Behar’s inspiring story of a young Jewish girl who flees Poland on the eve of WWII and makes a new life for herself in Cuba, while she works to rescue the rest of her family–based on Ruth’s family history

Things have gotten dire for Esther’s family in Poland as discrimination against Jews has intensified. With the family store shuttered, her father has fled to Cuba to work to bring his family over, and now Esther’s made sure she’s the first child to join him.
Being separated from her beloved sister is heart-wrenching, but Esther promises to write everything down that happens until they’re reunited. And many good things do happen. First of all, the Cuban people are welcoming and treat her with dignity. Then she chances upon a way to make more money than her peddler father could dream of when she discover her talent for making lightweight dresses. All of a sudden there is a demand for her designs, and it looks like they will soon be able to afford to bring the family over. But it turns out not everyone is pleased with her success and there are pockets of anti-Semitism in Cuba too. Now it’s a race to get her family out of Poland and into Cuba before it’s too late, and to see if there is a way to stop the hate from spreading through Cuba too.

EDITORIAL REVIEWS:
“This is a quiet story of determination, and an openly loving tribute to the author’s grandmother, who made the real journey that inspired Esther’s fictional one.”—The New York Times Book Review 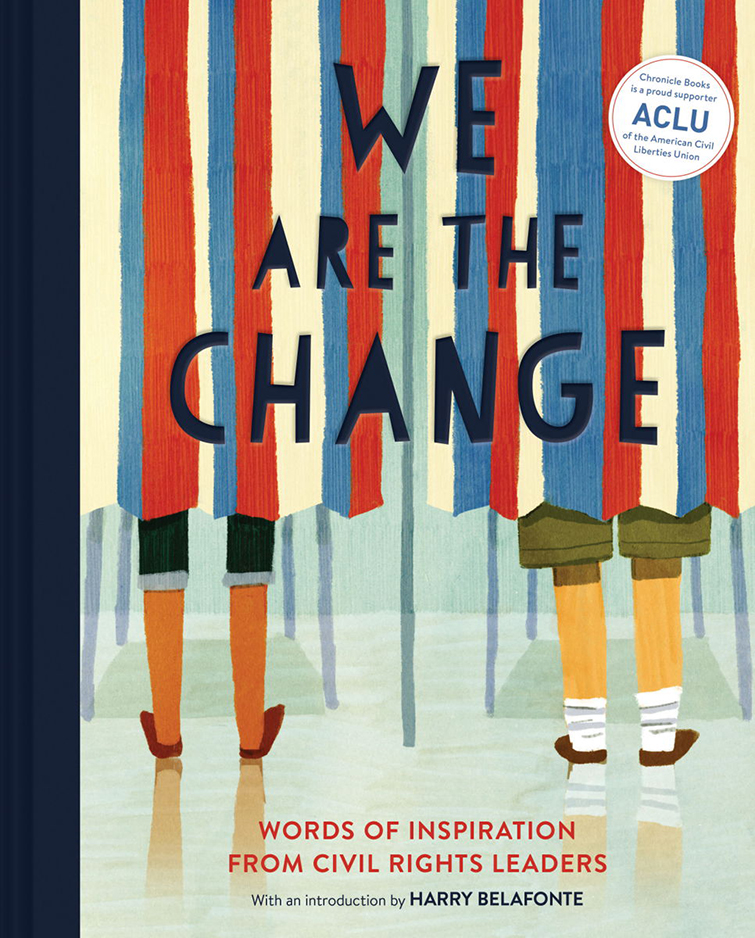 We Are The Change: Words of Inspiration From Civil Rights Leaders (2019)
Introduction by: Harry Belafonte, Illustrators: Various
Publisher: Chronicle Books, Age: 8 to 11

“Inspired by the continuing work of the American Civil Liberties Union” and introduced by singer and activist Harry Belafonte, this volume pairs the works of 16 varied contemporary illustrators with stirring quotations (chosen by those illustrators) by a wide range of historic and living public figures. Each artist also reflects on the personal significance of the quote they’ve chosen. Juana Medina paints five round, brightly colored smiling faces to accompany the famous lines from Gwendolyn Brooks—“We are each other’s harvest” —and writes that Brooks’s words “fill me with eagerness to find common ground with others.” Raúl the Third, quoting Dolores Huerta (“We should love and care for each other”), portrays a tearful mother and child trying to hug through the slats of what is clearly meant to be a border wall. “I hope that these times will pass,” the artist notes. Handsomely styled, and not afraid to take sides" —Publishers Weekly

AWARDS:
Amazon: Best Books of the Month: Nonfiction for Kids 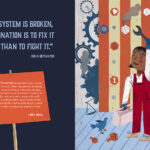 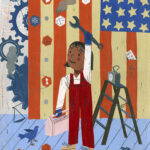 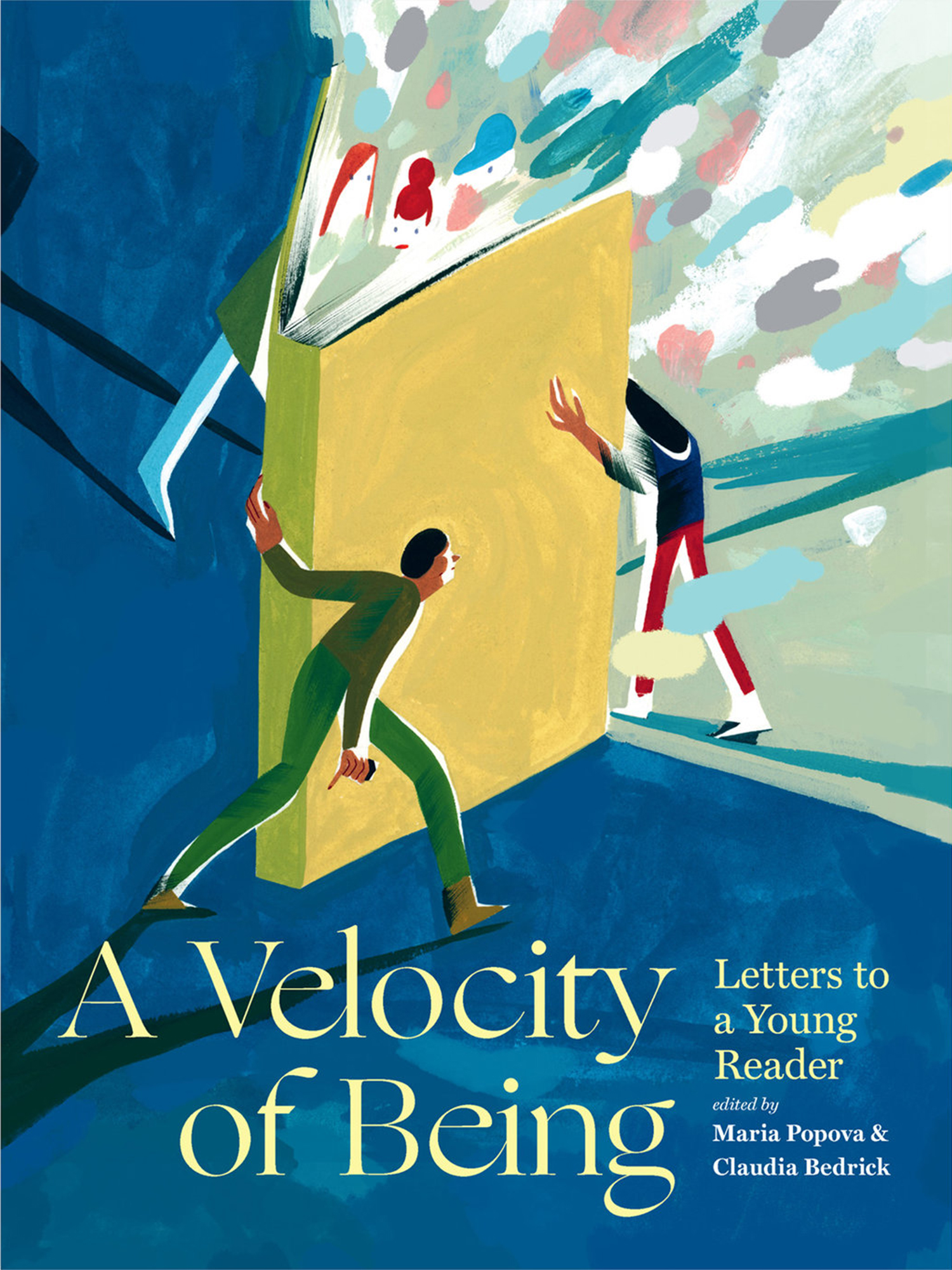 In these pages, some of today’s most wonderful culture-makers—writers, artists, scientists, entrepreneurs, and philosophers—reflect on the joys of reading, how books broaden and deepen human experience, and the ways in which the written word has formed their own character. On the page facing each letter, an illustration by a celebrated illustrator or graphic artist presents that artist's visual response.
This project is woven entirely of goodwill, generosity of spirit, and a shared love of books. Everyone involved has donated their time, and all profits will go to the New York Public Library systems.

EDITORIAL REVIEWS:
"This feast of a book provides ample food for thought, with some dazzling visuals, to boot. But like many feasts, this one goes on at length, with flavors and courses that tend to overlap. Still, the collection will nourish readers of all kinds, deserving a permanent place on our bookshelves." —Joan Silverman, The National Book Reveiw

"This should live on the nightstand, be picked up regularly, and savored. A treasure trove for anyone who loves words and pictures." —Amina Chaudhri, Booklist

"An embarrassment of riches." ―The New York Times

“The heft of A Velocity of Being: Letters to a Young Reader makes it feel grand and immense; momentous on its first page turn yet deeply personal. It’s a collection of letters and art for readers young and old from a community of writers, artists and other notable figures who speak about the deep magic of falling headlong into a story, the transformative power of words―stories settling into us, burrowing into our souls, running through our veins and becoming a part of who we are. ... Reading through compelling letter after letter is overwhelming in the best way possible. What are we without words, stories and books?” ― Michelle Sterling, Avery and Augustine 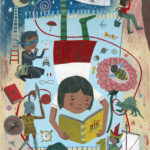 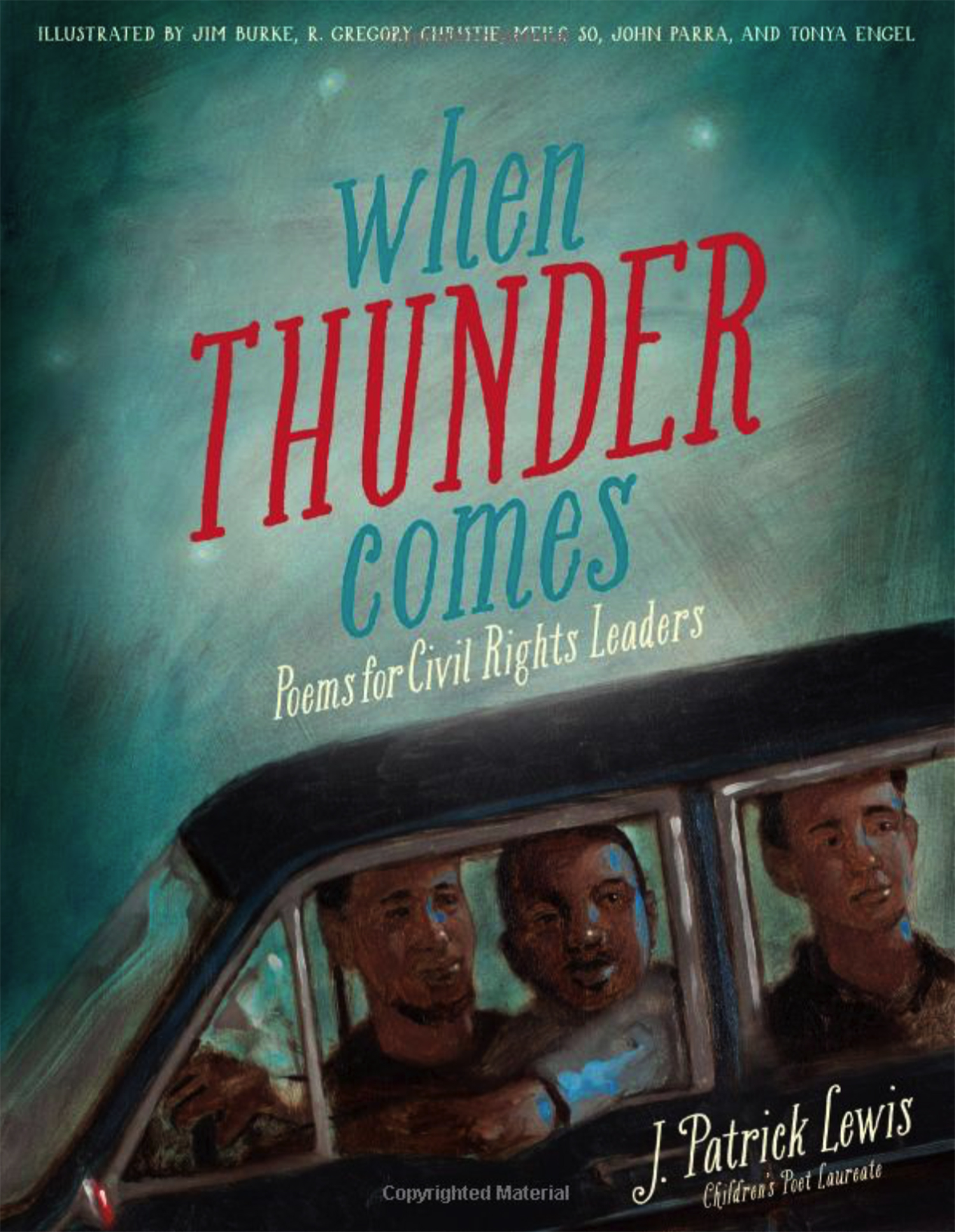 Written in moving verse, Children's Poet Laureate J. Patrick Lewis gives new voice to seventeen heroes of civil rights. Exquisitely illustrated by five extraordinary artists, this commanding collection of poems invites the reader to hear in each verse the thunder that lies in every voice, no matter how small.

EDITORIAL REVIEWS:
"Seventeen civil rights leaders from around the world leap off the page, animated in pulsing verse and vibrant imagery. Lewis gives voice to a variety of fighters, including well-known activists like Mohandas Gandhi and Coretta Scott King, and less familiar heroes such as Dennis James Banks and Sylvia Mendez, illuminating each with poetic form, style, rhythm, and tone as individual as the subjects themselves. Mamie Carthan Till’s elegy for her murdered son, Emmett, heaves with languid despair, while Aung San Suu Kyi’s proclamation against Burmese tyranny crackles with ironic outrage. The diversity of images is similarly stunning, with some unlikely pairings of artist to activist resulting in extraordinarily moving depictions. John Parra’s gentle portrait of Bangladeshi banker Muhammad Yunus glows with warmth and virtue, while Meilo So’s smudgy likeness of slain politician Harvey Milk captures his determination and foreshadows his demise. Exquisite book design—with hand-lettered titles and stanzas carefully off-kilter—knits everything together with cohesive polish. While the individual portraits are impressive on their own, their juxtapositions express unmistakable equality, offering readers a profound understanding of both what it takes to stand up and what happens when we stand together."—Thom Barthelmess. Booklist (Starred Review) 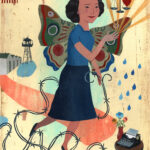 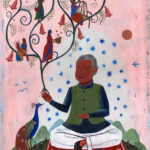 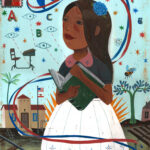 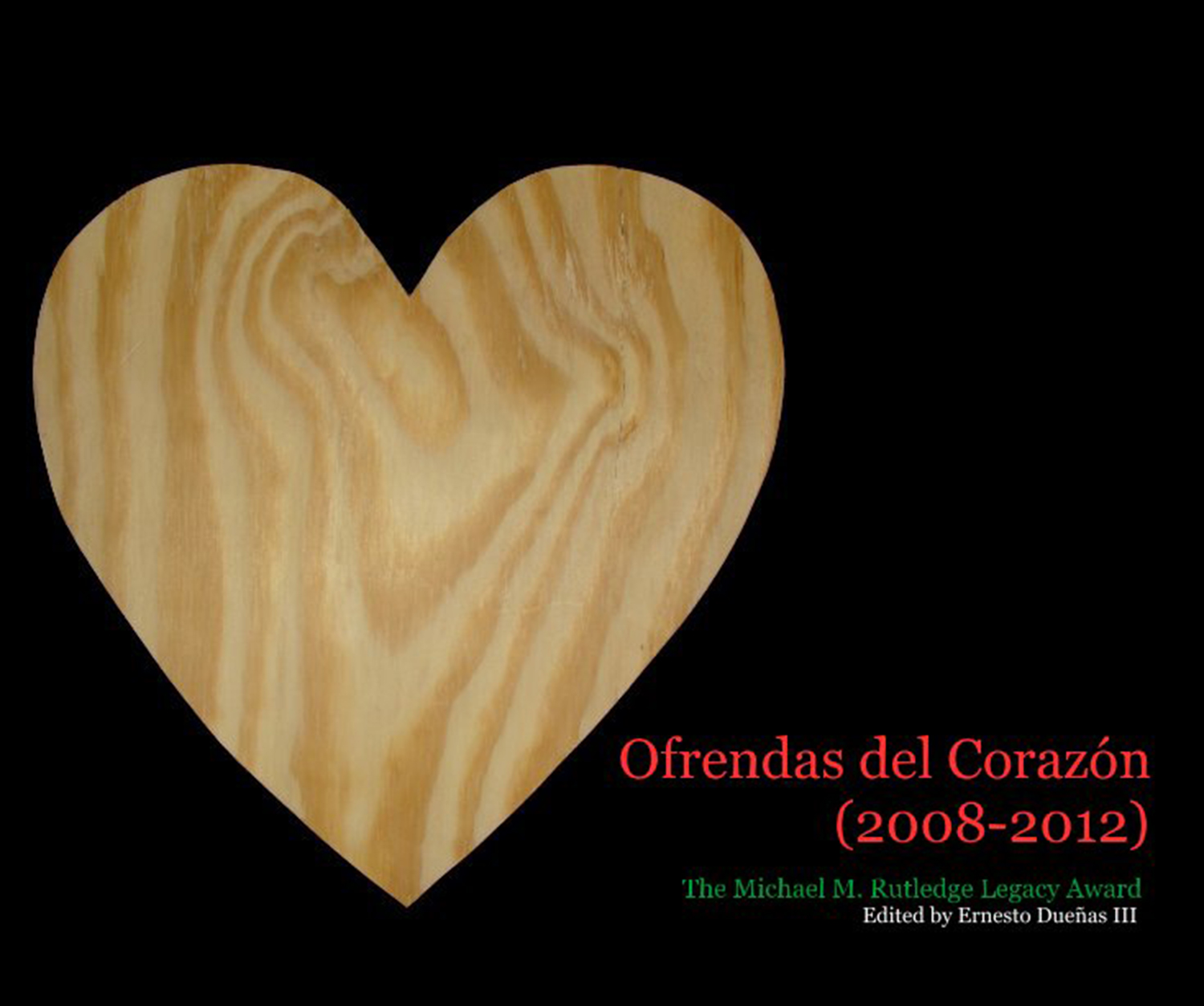 Ofrendas del Corazón is a silent heat art auction and the major fundraiser for the Michael M. Rutledge Legacy Award, a scholarship for PSJA Dual Language students. Michael M. Rutledge passed away on March 25, 2007, and was a sophomore at PSJA North High School at the time. His parents, Melvin and Nelda Rutledge, made the decision to donate his organs. It was through this gift that Michael was able to provide a new chance at life to 5 Texas residents.
Each year wooden hearts are given out and decorated by student, teachers, various community members and notable celebrities. The hearts are decorated as the participant chooses and then sold in an annual silent auction which is held the Friday before Valentine’s Day. All of the proceeds from Ofrendas del Corazon benefit the scholarships given to both PSJA High and PSJA North High Schools.  Anyone interested in participating, or simply making a donation can contact us on Facebook or through e-mail at: michaelslegacy@yahoo.com. 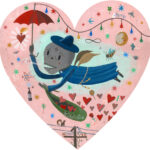